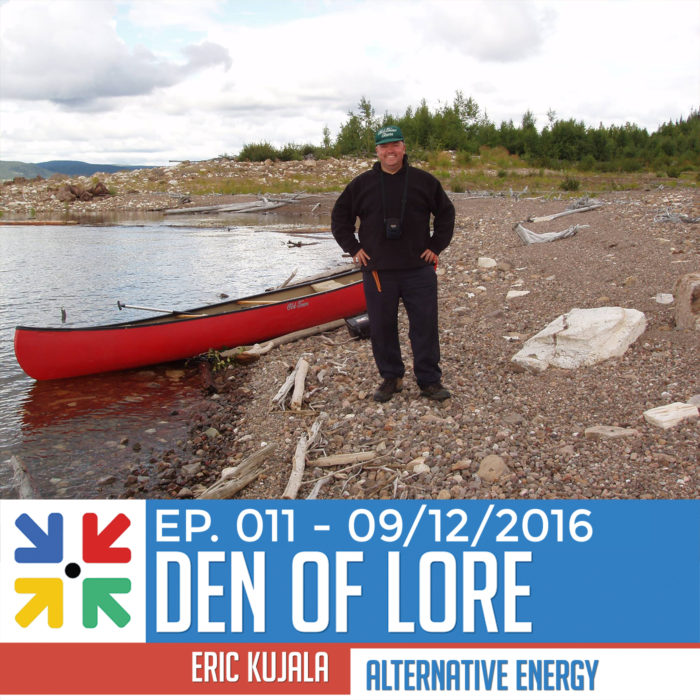 Eric talks with us about his involvement in the Royal Astronomical Society of Canada and his research into alternative energy sources. He has been a member of the RASC since 2005.

He was introduced to the RASC by Chuck O’Dale (a past Den of Lore guest EP. 007) whom he met online while trying to find an exploration partner to the Chubb Crater in Northern Quebec. Since then he and Chuck has explored more than a dozen impact craters. As a member of the RASC he also is involved in the video recording and streaming of monthly meetings as an effort to make the society more visible to the general public, and to archive the presentations made. This has also included lectures and workshops. The RASC is a public forum which enables the public to engage in astronomy and science in general.

In this monster episode we talk audio engineering, have a special appearance from Sacred Geometry International’s Cameron, have a rousing discussion on a Jimmy Church interaction, and at the tail end we have a listener call in to discuss earth as a prison planet.

What a wild night!

Eric has worked as a videographer for more than 30 years in the Ottawa area. He has worked for Tele-Quebec, TFO and several video production companies in the area as a camera operator, video editor and producer. Married with 2 kids, he lives in Gatineau, Quebec. All his life he has been interested in science and the outdoors. He’s an avid canoeist and explorer, and has canoed the many rives in James and Hudson Bay, Quebec. He’s also an avid environmentalist who has studied the effects on the environment caused by the establishment of hydro electric dams. He is currently studying two forms of energy which are not well understood by the public. All of his activities centre around a genuine concern for our planet.

Denver Michaels comes on to discuss recent Nessie sightings and to give a synopsis of his new book. Also to get the details on the “SEND DENVER MICHAELS A SAMMICH” contests.

Links to recent blog posts regarding Nessie are below.

Most Nessie Sightings Since 2000

Nessie in the News!