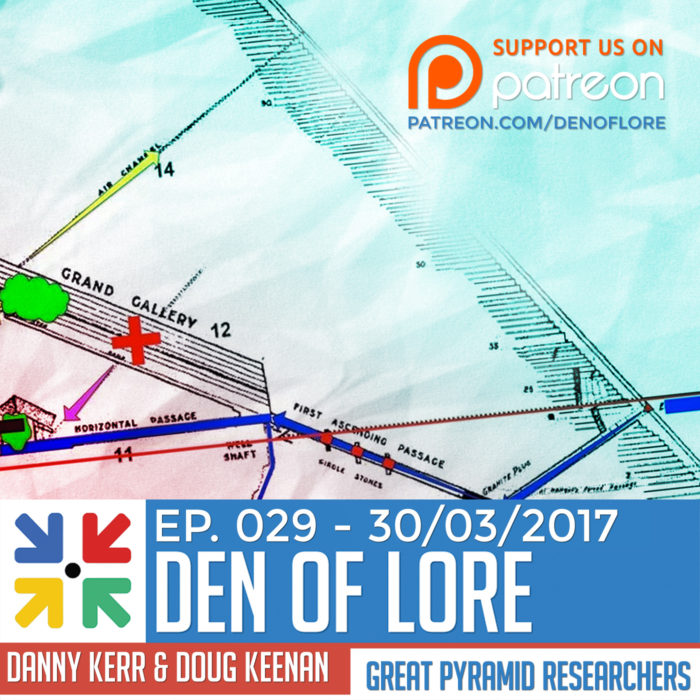 Danny Kerr & Doug Keenan enter the Den of a special Thursday night show to discuss their extensive research into the Great Pyramid. The Pyramid holds many mysteries, and seems to be many things. The Great Pyramid does not seem to be a tomb, it instead seems more like a machine, a machine that generated power, real usable power. Not only that, but The Great Pyramid can be seen as a scale model of not only the earth, but the entire solar system.

To kick off the episode, we are reading listener emails, and giving an update on the John Anthony West Project Fundly Campaign.

We will also hopefully get a sammich update from Denver Michaels at the end of the show! (Send your sammich recipies to info@denoflore.com to enter to win 3 signed copies of Denver Michaels books!)

MAKE DONATIONS TO JOHN’S CANCER TREATMENT THROUGH CLAY ROUPE’S OFFICIAL FUNDLY CAMPAIGN HERE!
DONATE VIA PAYPAY TO THE WEST FAMILY
or via https://paypal.com to zoecwest@gmail.com

Danny Kerr is a researcher from the Niagra region of Canada, and although his research may be overwhelming to some, his basic idea is that both Tesla and the Ancients thought up similar systems for the distribution of electricity. No one has yet been able to replicate Teslas Earth Wave Vibration Theory or demonstrate a working model of the Great Pyramid as a power plant.

Danny demonstrates the simple similarities between Tesla’s Wardenclyffe Tower and the Pyramids, and present the idea that the Great Pyramid could function as a low frequency acoustic engine with the passages and chambers of the Pyramid in their current empty state.

Doug Keenan was born in Indiana and received his degree in electrical engineering from the Rose-Hulman Institute of Technology. For more than twenty years he enjoyed a career in the consumer electronics field and holds several patents including the multi-brand universal remote control. A computer programmer, botanist and entrepreneur.