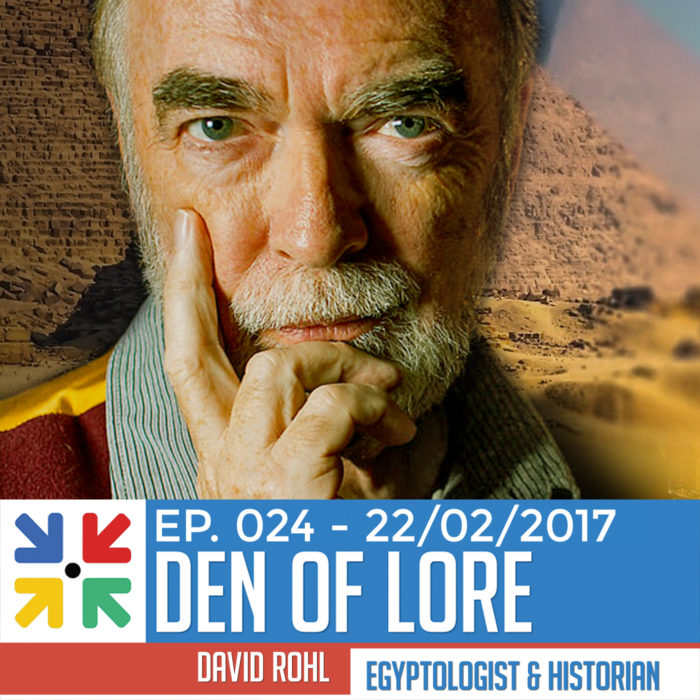 Support us on Patreon @ https://www.patreon.com/denoflore

David Rohl is recognized as the UK’s highest profile Egyptologist and one of the world’s best-known historians. We have the privilege and honour to welcome him into the Den to discuss controversial, and groundbreaking, work on discovering and establishing a new chronology for Egyptian history. Research that was a heavy basis for the popular documentary found on Netflix – Patterns of Evidence: Exodus.

In this interview we delve deep into the history of Egypt, Gobekli Tepe, and discuss Atlantis.

Always controversial, he is not only a best-selling writer but also an explorer, TV Presenter, internationally renowned public lecturer, composer, musician, sound engineer, record producer, photographer and video editor. In addition, he was Archaeology Correspondent for the Daily Express. He takes all the pictures in his books and even typesets those books for presentation directly to the printer following editorial changes and proofing corrections.

New Chronology is an alternative chronology of the ancient Near East. It proposes a major revision of the established Egyptian chronology, in particular by re-dating Egyptian kings of the Nineteenth through Twenty-fifth Dynasties, bringing forward conventional dating by up to 350 years. Rohl asserts that the New Chronology allows him to identify some of the characters in the Hebrew Bible with people whose names appear in archaeological finds.

DONATE VIA PAYPAY TO THE WEST FAMILY
https://goo.gl/KoCwfB
or via https://paypal.com to zoecwest@gmail.com

With degrees in Egyptology, Ancient History, Mycenaean Archaeology and Levantine Archaeology, David is a genuine scholar with a full list of academic credentials but, at the same time, is seen as a highly original thinker. In a recent conference at Reading University David was introduced tongue-in-cheek as ‘the furry caterpillar in the Egyptological salad’ – a description received with thunderous applause. Many in the conservative establishment view him as a threat to the current status quo in the various fields of ancient history, but others see him as a breath of fresh air offering exciting, colourful history in opposition to conservative, uninspiring mundanity.

David’s popularity stems principally from his internationally acclaimed TV series ‘Pharaohs and Kings’ which has been seen by millions around the world. The documentary ‘In Search of Eden’ has also reached a huge audience and is constantly being repeated on the satellite channels.