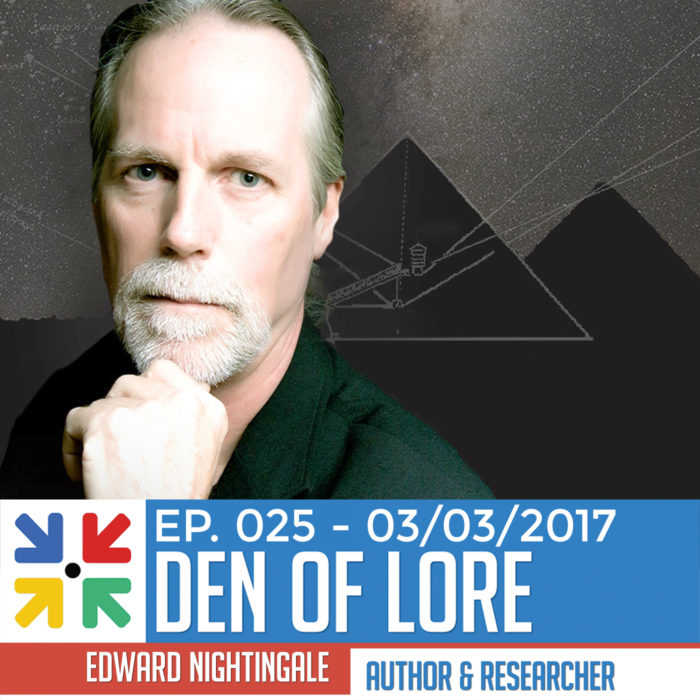 Support us on Patreon @ https://www.patreon.com/denoflore

Edward Nightingale returns to the Den for a featured episode to dig deep and discuss all aspects of his work on the Giza Template. If you caught the last 2 hours of our #JAWProject telethon, then you got just a taste of the lore this man has in store for the listeners.

During this mammoth 5 hour episode, we get joined by Denver Michaels, Camron Wiltshire, and discuss the Giza Template, Current events, the philosophy behind our current political troubles, and touched on the Templars having known the secrets behind the Giza Template.

DONATE VIA PAYPAY TO THE WEST FAMILY

Edward Nightingale has uncovered the design for the Giza Plateau and the pyramids. After more than 20 years of research, his findings are presented in his two-part series on what is known as the Giza Template. He lives in Bangor, Pennsylvania, accepts speaking engagements, and his books are available nationwide.

He offers a mathematical and geometric blueprint, not theory. You can follow along step-by-step as he verifies his scientific method. No other researcher has been able to uncover the architectural design of the pyramids and present it in such detail. The information is serious and precise.

As a woodworker using geometry and math to build structures, Edward Nightingale always had a sense of wonder about the pyramids. To verify his ideas about how they were designed, he traveled to Egypt in 1997, knowing the answer was there. After years of diligent research and the advent of satellite imaging, he figured out the design and why it exists. Now he shares it with you.
Intro Song:
Only Knows – Broke for Free
http://brokeforfree.com